The 33rd wedding anniversary isn’t usually given top priority by couples who have reached this marital year. Not a recognised milestone and having no well known symbol or theme, it is all too easy to forget to even celebrate as this anniversary slips past. However each and every anniversary occasion is an important cause for admiration, and offers the perfect opportunity for you to show your family members or friends who have successfully reached this junction in their marital journey how much they are truly appreciated and how important they are in the lives of all around them.

There are lots of great ideas for 33rd wedding anniversary gift, so whether the recipients have expressed a preference for traditional gifts or whether they prefer more contemporary presents, they is certain to be something that they will love and cherish and which will, at the same time, convey your message of good wishes and a hope for happiness in the future to the lucky pair.

What is the 33rd Anniversary Tradition?

The original lists that were made in the 1920s did not assign a material to the 33rd wedding anniversary as it was not deemed to be an occasion worthy of marking out as special. Only the first 10 years of matrimony were singled out for attention and then every fifth year thereafter. In later years however, more lists were created, designed to cater more for the tastes of contemporary couples, and it is in these lists that the 33rd year of marriage was given its own association with amethyst.

Giving your loved ones an amethyst gift on the occasion of their 33 year anniversary is a wonderful way to give a thoughtful and meaningful token of esteem that is steeped in meaning and symbolism and conveys the level of thought and effort put into choosing something entirely appropriate for the occasion.

What is the Significance of Amethyst? 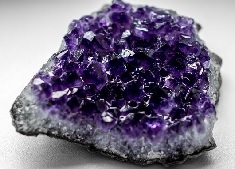 For centuries, amethyst has been prized as a gemstone of great value, sometimes even comparable with diamonds. Amethysts are found in the collections of many royal families as well as in museums. There is even an enormous amethyst found in the Smithsonian Museum that weighs no less than 400 lbs! Amethysts were especially important in religious history where their deep purple colouration was thought to represent the colour of Christ. Amethysts were used as the stone set into the rings of Bishops and it was even mentioned in the Bible.

In other ancient civilizations, amethysts were also important. In Greek myth, Amethyst was a virgin who angered the god Dionysus when he was drunk. When she asked the goddess Diana for help she was transformed into white quartz, but when Dionysus realised what had happened he was so remorseful that his tears fell into his cup of wine, causing it to overflow and stain the quartz purple, giving the stone its name, amethyst. No wonder then, that one of the properties of amethyst is said to be to protect the wearer from drunkeness!

Throughout history it has had many uses, from being rubbed on the face as a treatment for skin ailments to detoxification of the body and from curing headaches to helping get rid of stomach pain. It has also been linked with many other symbolic meanings and uses, including to protect soldiers in battle, to control evil thoughts, to improve business sense and even to ward off contagious diseases. It also stands for modesty and humility while bringing the wearer wealth and riches. If you give your loved ones an amethyst 33 year anniversary gift, you will be giving them a present that reflects centuries of symbolism and has the deepest meaning and significance. It captures the essence of this anniversary’s theme and brings a host of positive wishes for the couple now and in the future. 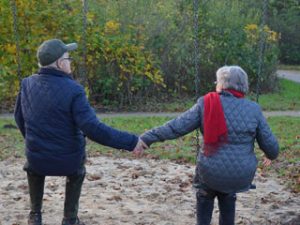 Alternatively, if jewellery would not please your loved ones, why not adopt the purple colour of amethyst as your theme and give the couple a purple ornament, purple homewares or purple textiles? A pair of matching purple monogrammed bath robes, a purple bedspread or a personalised purple silk cushion would all be fantastic thirty three year anniversary gifts.

Giving Flowers to Your Loved Ones on Their 33rd Anniversary 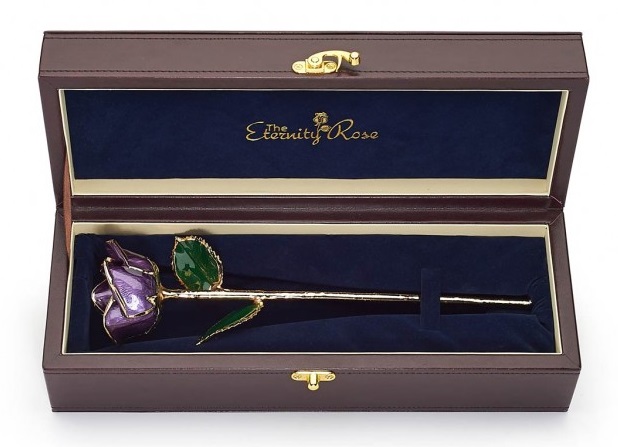 Flowers are an ever popular gift choice on the 33rd anniversary as much as any other year. Choose any type of flower that you think will be appreciated as there are no traditional blossoms associated with this anniversary year. Roses are always a good bet because of their extreme beauty and connotations of romantic love. Choose an eternally lasting rose when you surprise your loved ones with a gorgeous purple glazed Eternity Rose.

Reflecting the amethyst theme of this anniversary occasion, each unique work of art is made from a single hand picked natural rose, preserved in all its splendour and trimmed with purest 24 karat gold to make a luxurious gift to be treasured for a lifetime. What better way to impress and delight your loved ones on their 33rd wedding anniversary than with such a meaningful and gorgeous token of appreciation?