Only two years from that huge milestone of the golden wedding, it is not unusual for couples to decide to keep their 48th wedding anniversary low key. That, however, does not mean that you should forget to help them to celebrate. Every single anniversary occasion is worthy of praise and admiration, especially when a couple have been married as long as your friends or relatives. So help them to mark the day by giving them a gift that perfectly expresses just how happy you feel for them and just how much they are appreciated and admired by everyone in their lives. There are many great ideas that you can take inspiration from when you are choosing a 48th anniversary gift, so whether your loved ones prefer something traditional or a little more modern, there is bound to be a token of esteem that they will treasure for many more happily married years.

The first anniversary is known as the paper anniversary, the 25th as the silver anniversary and the 40th as the ruby wedding, but the 48th wedding anniversary, unsurprisingly, has no famous symbol or theme linked to it. That is not to say, however, that is does not have a theme at all. In fact it does, although it is not a traditional or original one. In the 1920s when the very first gift lists were created for the major anniversary occasions, only every fifth year after the first decade was included. This was because only a few marital milestones were considered to be worthy of singling out for attention. It was not until more recently that the importance of properly acknowledging every marital year that passes was recognised, and so the other anniversary occasions which had originally been missed out were given their own theme or symbol. This included the 48th wedding anniversary, which was assigned the gift of optical goods.

Optical goods are a good choice for couples on their 48th wedding anniversary. Luxurious enough to demonstrate your appreciation while being exciting enough to please the recipients, there is also plenty of choice so that you can find something that they will love to receive. What about a pair of stylish sunglasses for each partner? A designer pair will last them for years and will perfectly convey your esteem through the luxury nature of the gift. Alternatively, why not give something equally practical but even more impressive, such as a telescope or a new camera? Or, for a clever twist on this theme, why not arrange for the pair to attend a photographic course where they can enjoy learning new skills together? Or arrange for the couple to go to an observatory for a course on spotting planets and stars.

The 48th year of marriage has its own gemstone associated with it, although it is a particularly obscure one. Feldspar is the traditional gemstone forty eighth anniversary gift, and although it is not a well known gemstone, it is used in many well known household items. Formed when magma crystallizes, feldspars are found in sedimentary, igneous and metamorphic rocks. Italy, China and Turkey are the world’s biggest producers of feldspar and around 20 million tonnes are produced annually. Although it is not well known in its natural form, it is used in many common household products, including in glassmaking, producing ceramics, and even in paint products. Interestingly, a rock from Mars that was analysed by the Curiosity Rover turned out to have high feldspar contents! You could capture the essence of this material by giving your loved ones a ceramic or glassware gift for their home. A pretty glass vase, a decorative glass ornament or even a glass bowl would be a precious and lasting token to remind your loved ones of their 48th wedding anniversary, or you could give some stylish ceramic bowls which would be both practical and attractive. 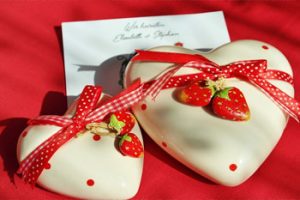 If you are planning on giving your loved ones a glass vase to capture the feldspar theme of this anniversary occasion, why not give them a bouquet of beautiful flowers to accompany it? All couples appreciate receiving flowers on any anniversary year, as they are exquisitely beautiful and brighten up their lives at this special time. Surprise your friends or relatives on the occasion of their 48 year wedding anniversary by giving them a striking floral arrangement that incorporates the traditional flower that is linked with this marital year. The aster is the traditional floral 48 year anniversary gift and brings with it its own symbolism and special message of appreciation. Similar to a daisy, the name of this gorgeous blossom is derived from the ancient Greek word for star, and much of its cultural heritage comes from the ancient Greek times when this flower was used to ward off evil spirits. Supposedly grown where the goddess Astraea’s tears fell, it is no wonder that these blossom were considered sacred. Although wild asters are purple or blue, horticultured varieties can be a host of shades from pink to white. Adding these flowers to a bouquet as a forty eight year anniversary gift for your loved ones symbolises elegance and friendship. Alternatively, if you would profer to give a flower that is a perennial anniversary favourite, the rose is the best choice. Spectacular and exquisite, it is no wonder that the rose is regularly chosen time and again as the best anniversary gift for loved ones. Bringing with it the message of romance and love, you can perfectly demonstrate your best wishes for your loved ones with this magnificent gift. For a rose gift that lasts a lifetime, however, you should choose the stunning glazed Eternity Rose. Available in a wealth of colours to suit every preference, each blossom is created by hand from a single hand picked natural rose blossom, intricately glazed and trimmed with pure 24 karat gold, resulting in a unique work of art to be treasured for years to come.